Share All sharing options for: Best of the West #17: Tyler Pitlick, Minnesota State 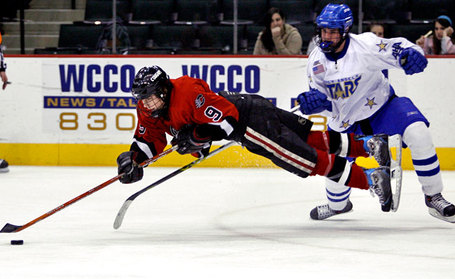 Role he'll likely play: Like Notre Dame's Riley Sheahan, Pitlick will be one of the youngest players in college hockey and one of the few that will be first-time eligible for the NHL Draft. Minnesota State will have a deep corps of forwards this year, but Pitlick is too talented to keep off the ice, and the Mavericks could use a center that can put up points.

Why he is ranked here: Some scouts felt that if Pitlick had been eligible for last year's draft, he would have gone in the first two or three rounds and would have been a more serious contender for the Mr. Hockey award. But he'll be watched very closely this year, and could be MSU's highest draft pick--and most talented player--since David Backes.

Why he'll be great: Pitlick can do a little bit of everything. He's got good size, skates well, can score goals, makes nice passes, and can win faceoffs, and has shown a ton of potential to get even better.

Why he might not: He's making a big jump in competition and may be a little overwhelmed. It could be a few years before he really contributes