Share All sharing options for: Best of the West #16: Mike Cichy, North Dakota 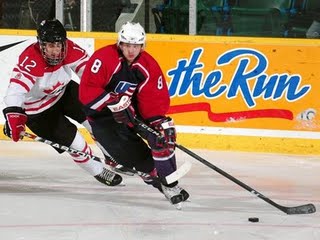 Role he'll likely play: Cichy’s career underwent a bit of a renaissance last season. After being highly-touted as a 15-year-old, Cichy fell off the map a bit, to the point where he went undrafted his first year eligible for the draft. But after a great USHL season last year, Cichy was selected by the Montreal Canadiens, and looks ready for a solid career at . Cichy's role may not be huge in his first season, as North Dakota has a lot of forwards returning, but he'll likely be on a third or fourth line and chip in somewhere in the neighborhood of 5-10 goals for the Sioux. As he matures, he'll likely end up being a top 6 powerplay type of forward for the Sioux.

Why he is ranked here: Cichy has always had a lot of potential. Last year, he started taking advantage of that potential by being one of the top scorers in the USHL. He's not quite in the same class as some of the stars North Dakota has recruited in the past like Johnathan Toews or Travis Zajac, but he should be a very solid player.

Why he'll be great: He has the type of skill necessary to be an elite scorer at the college level.

Why he might not: If he falls back into the bad habits which got him passed over in the draft two years ago, he might start losing out on the competition for ice time.