Share All sharing options for: Best of the West #14: Kevin Murdock, Minnesota State 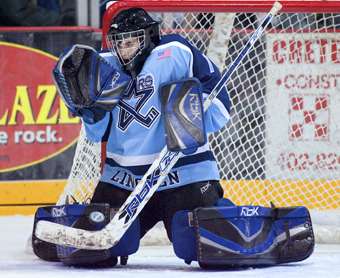 Role he'll likely play: Murdock will be one of three goalies vying for playing time at this season, all of whom have never played a minute of college hockey. The native has shown exceptional skills at both Shattuck-St. Mary’s and the Lincoln Stars, but it could be difficult for the freshman to take the reigns as full-time starter from Day 1.

Why he is ranked here: Murdock led the USHL in goals against average and save percentage last season, and will likely get every opportunity to showcase his skills with MSU this year.

Why he'll be great: Murdock isn't huge, but is very quick and for a young kid, he has two years of junior hockey experience, so he's familiar with older competition. He'll also be able to continue working with his former Shattuck goalie coach Des Christopher at MSU.

Why he might not: Murdock will likely face a lot of shots next season, which has a way of hurting a goalie's numbers. It may take him a while to adjust to the college game.He could also lose out on playing time to fellow goalies Austin Lee or Phil Cook.