Share All sharing options for: Best of the West #12: Matt Donovan, Denver 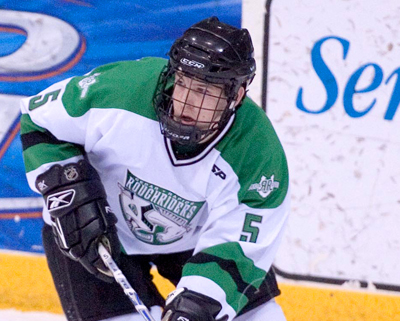 Role he'll likely play: Donovan is a solid, steady defenseman that can also chip in some offense as well. He likely won't be a first pairing guy, but be a guy that Denver can count on to play in any situation. Denver has some openings on their blueline due to graduation, so he should be a regular in the lineup.

Why he is ranked here: Donovan isn't the most exciting prospect, but he is a very underrated player. He's a fantastic all-around defenseman that can play in any zone and in any situation.

Why he'll be great: He's a very smart, versatile player. In his second year in the USHL, he really became a serious offensive threat, and he could develop into that role as he matures at Denver.

Why he might not: Donovan isn't the most physically gifted player, hence only being a 4th round draft pick, so he may have difficulty taking his game to the next level. He may end up as a player that is good at everything, but not great at anything.