Share All sharing options for: Best of the West #10: Seth Helgeson, Minnesota 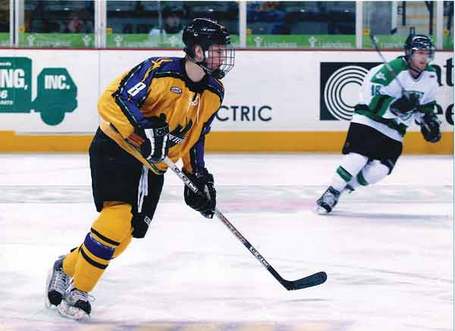 Role he'll likely play: Minnesota had a serious problem with lack of toughness on the blueline last season. Guys like Brian Schack and Grant Scott were too much of a liability in other areas to see consistent--or in Scott's case, any--ice time. Helgeson fills that need very well. He'll likely be a solid stay-at-home defenseman that can cover a lot of the mistakes made some of the more offensive-minded defensemen in front of him.

Why he is ranked here: Helgeson plays with a very physical edge, but also has decent skills, including enough skating ability to handle playing in the WCHA.

Why he'll be great: Helgeson will be able to focus on playing a safe, simple defensive game instead of trying to overextend himself on the offensive end. He could be very valuable to Minnesota in terms of providing toughness and physical play.

Why he might not: If Helgeson gets off to a slow start this season, he could get buried on the Gophers depth chart and struggle to find ice time.

Contrived Rivals-style star ranking: Four and a half stars