Share All sharing options for: Best of the West #9: Chris Brown, Michigan 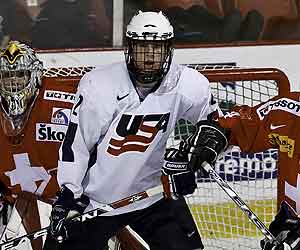 Role he'll likely play: Brown plays a fairly simple game, and should do so especially in his first year as he adjusts to the college game. He'll be an ideal second or third line wing that can play solid defense, throw big hits, block shots and cause havoc on the forecheck. His skating is good enough that he could earn some penalty kill time, and eventually, work in front of the net on the powerplay.

Why he is ranked here: Most big guys at the college level are lumbering plodders. Brown is a fantastic skater that isn't afraid to throw his weight around or get his nose dirty. He may not have the offensive talent of other players ranked this high, but he is a much more complete player in other aspects of the game.

Why he'll be great: Brown is a fairly low-risk player in that he'll be able to make contributions even if he's not scoring. He could be a terror to defend in front of the net for other teams. Also, he has the potential to be a captain at Michigan some day.

Why he might not: If his scoring ability doesn't come around, he may be confined to a third or fourth line role.