Share All sharing options for: Best of the West #8: Drew Shore, Denver 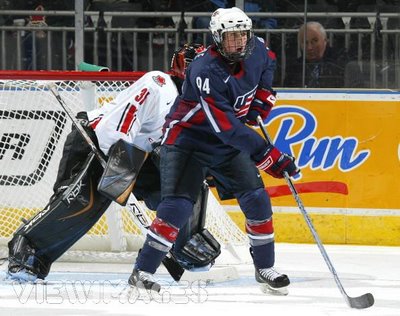 Role he'll likely play: Denver returns a pretty deep team, and Tyler Ruegsegger should center the team's top line if he can stay healthy, and Denver moved Joe Colborne to center last year, likely putting Shore on the third line, or moving to a wing on the second line. He should also see some second unit powerplay time in his first year.

Why he is ranked here: Shore has always been a bit enigmatic. He's got great size and skills, but also draws some harsh criticism from various people for lacking toughness. It may take some time before he really starts to adjust to playing in the more physical WCHA, but once he gets better at using his size, he should become a dangerous scorer.

Why he'll be great: Shore is 6-3 and very adept at handling the puck and making pretty passes. He has the potential to be a great offensive player.

Why he might not: He'll have to become a better defensive center and use his size more effectively in order to keep getting ice time.