Share All sharing options for: Best of the West #7: Danny Kristo, North Dakota 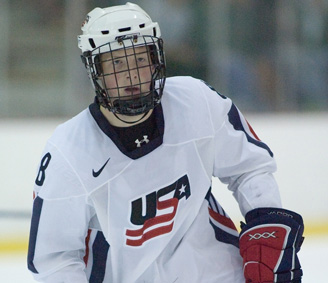 Role he'll likely play: The Sioux don't have a lot of openings in their top 12 forwards, but Kristo should be too good to keep off the ice. Kristo may not see a lot of powerplay time right away, but his speed may allow him to contribute on the penalty kill.

Why he is ranked here: Kristo’s reputation as a scorer may have diminished a bit in recent years, though he did put up a lot of points in the USHL last year, but he’s a quintessential leader and team player that can make contributions on both ends of the ice.

Why he'll be great: Kristo’s a very low-risk player in that even if he’s not scoring, he’ll still be playing solid hockey, and still be a solid locker room presence.

Why he might not: His contributions may not always be noticeable to the casual fan.