Share All sharing options for: Best of the West #5: Riley Sheahan, Notre Dame 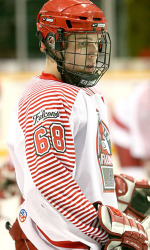 Role he'll likely play: Sheahan is a really young kid coming onto a deep, experienced team, so it's unlikely he'll be the star of the show, but he does play center, a position the Irish are relatively thin at, so he should get some ice time. He'll likely start out as the third best center on the Irish depth chart.

Why he is ranked here: Sheahan will be one of the few first-time eligible draft prospects in college hockey this season. He’s considered even more talented than former St. Catharines teammate and current Michigan State Spartan Daultan Leveille, who went in the first round of the NHL Draft to in 2007, but Sheahan will be making a huge step up in competition this year, moving to the NCAA ranks as a late '91 birthdate. But most seem to think he has the ability to handle it.

Why he'll be great: Sheahan is the complete package in terms of things you’d look for in a first round draft pick. He's got good size, great skating, and understands the game very well. Notre Dame head coach Jeff Jackson called him "as complete a player as we've recruited from an offensive perspective".

Why he might not: He’s making a huge jump in competition from a smaller Canadian junior league to the CCHA. It may take a year or two before he really starts to shine.