Share All sharing options for: Best of the West #4: Nick Leddy, Minnesota 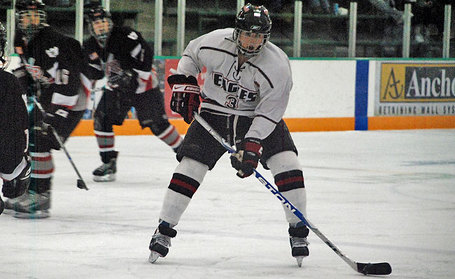 Role he'll likely play: Leddy will have an uphill climb to earn key minutes with the Gophers in his freshman season. He's a dynamic offensive defenseman, but the Gophers already have players like David Fischer, Cade Fairchild, and Aaron Ness filling that role. That said, defense wasn't a strength for Minnesota last season, and Leddy could see his ice time increase as the year goes on.

Why he is ranked here: Leddy was selected 16th overall, much higher than most had him projected, by his hometown Minnesota Wild. That clearly shows he's a very talented player, but he is also much farther from reaching his potential than the players ahead of him on the list. Leddy is making a difficult jump from the US high school ranks, but eventually, his ability should shine through.

Why he'll be great: Leddy plays a very mature game, and is likely to earn ice time because of his ability to avoid costly mistakes on the blueline. He's one of the best pure skaters in this class as well, which is a huge asset for any defenseman.

Why he might not: Unfair or not, there will be extra expectations on Leddy because he was drafted by the Wild, and more importantly, ahead of teammate Jordan Schroeder who could be an All-American this year. If the pressure to perform well causes him to move outside his comfort zone and try to do too much on the ice, he could struggle.