Share All sharing options for: Best of the West #3: Kyle Palmieri, Notre Dame 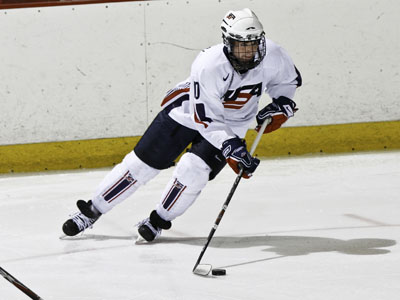 n. Palmieri has the talent to play on a top line, but will likely have to earn that designation rather than starting there from day one. He'll also be an asset on the powerplay.

Why he is ranked here: Palmieri may be the most exciting forward in this group. He's shown amazing offensive capabilities against some very tough competition at the NTDP. He's maybe not the difference-maker the two players ranked ahead of him should be, given that Notre Dame will be excellent regardless, but he is a very good player.

Why he'll be great: : Palmieri’s playmaking abilities are almost without peer. He’s already proven he can play against college teams, and he's surrounded by a very talented cast of players at Notre Dame.

Why he might not: Discipline and defense are the two hallmarks of Jeff Jackson hockey, and Palmieri has shown deficiencies in both areas. His offenses at the NTDP may have been minor in some people’s eyes, but Notre Dame head coach Jeff Jackson has a reputation as a strict disciplinarian that likely won’t tolerate even "minor" issues.