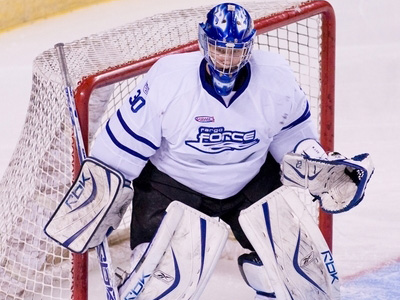 Role he'll likely play: The departure of Jase Weslosky due to academic ineligibility may have changed the equation for and Mike Lee this year. Weslosky’s veteran presence would have allowed to bring Lee along slowly and make sure he was ready to handle the workload of being a number one starter at the college level. As it is, Lee will likely be thrown into the fire pretty quickly at SCSU. He'll be St. Cloud's number one goalie sooner or later; probably sooner.

Why he is ranked here: Lee has an ability to take his game to the next level and be dominating. He might be enough to help finally get over the hump and bring them some success in the NCAA tournament. He's a very strong goalie both physically and mentally.

Why he'll be great: Lee's mental make-up is one of his best assets. Even if he struggles early on while adjusting to the college game, he's not likely to let it rattle him.

Why he might not: may favor Dan Dunn’s experience in goal, especially to start the season. It’s a lot to expect an 18-year-old freshman to be a number one starting goalie right out of the gate. Also, most goalies have the tendency to only be as good as the defense in front of him.