Share All sharing options for: Best of the West #1: Dylan Olsen, Minnesota-Duluth 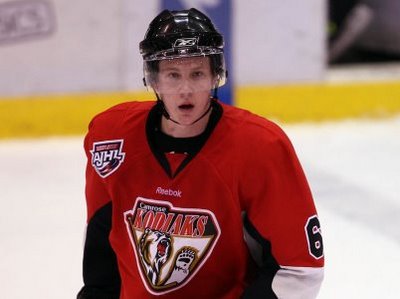 Role He'll Likely Play: Duluth has to replace a lot of experience on the blueline from their team last season. Olsen could potentially be the team's top defenseman by the end of the season.

Why he is ranked here: Not only is Olsen tremendously talented, and very well-developed for his age, but he’ll be stepping into a situation at Minnesota-Duluth where he’ll be expected to play big minutes right away, including using his big shot on the powerplay. It's a case of a really good player finding a perfect situation.

Why he’ll be great: Olsen should make the perfect replacement for Evan Oberg who signed with the Vancouver Canucks over the offseason.He even played for the same junior team as Oberg. He'll give UMD an elite defenseman that plays every situation and will make life easier for new starting goaltender Brady Hjelle.

Why he might not: Players like Olsen don’t come to UMD every year, meaning UMD could have a hard time replacing him if he leaves after a year or two.