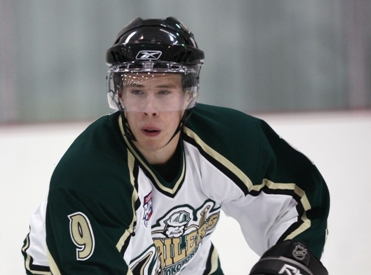 Corban Knight is the true definition of a "late bloomer". Knight was passed over in the WHL Bantam Draft as a 14-year-old. Last year, his first time being eligible for the draft, he failed to draw any interest from WHL teams. He struggled to even make an AJHL team, and spent most of the year playing Midget AAA hockey.

But a growth spurt and outstanding season turned Knight into a legitimate pro prospect. He developed great hands and offensive abilities as a smaller player, and that carried over once he grew into a tough 6'1" center. This past January, he earned a scholarship offer to the University of North Dakota. After going unranked by NHL Central Scouting in their mid-term rankings, he jumped all the way to 64th in the final rankings. That high ranking earned him an invite to the NHL Combine, where he performed quite well.

Knight will return to the AJHL for one more season before heading to the University of North Dakota.

Knight Gets Look at AJHL-March 2008

Knight is probably still a bit of a mystery to most NHL teams. He wasn't on anyone's radar until this past season, and even then, I'm sure scouts weren't flocking to a ton of Okotoks Oiler games. There's also probably concnern that he's only had one good year of hockey at the junior level, and at a relatively low level of juniors.

But at the same time, Knight is described as a talented center with slick hands, that hit a late growth spurt to give him NHL-level size. That's almost the exact same description as Tyler Bozak, who all 30 thirty NHL teams were vying for in the free agent market this past fall. That potential alone makes Knight worthy a pick, though some of the question makrs may mean that pick might not come until the later rounds.