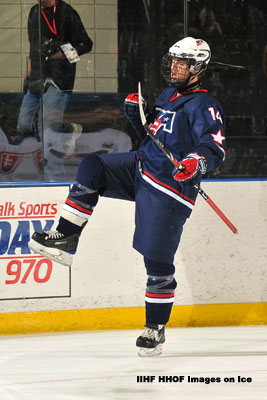 Kevin Lynch is a metro-Detroit area kid that played for the Detroit Honeybaked AAA program. As a 15-year-old, he played for the Honeybaked Midget Minor squad that featured Cam Fowler, Kenny Ryan, David Valek, Chris Brown, and Drew Shore. All five of those players would later join Lynch on the US NTDP team, and all of them should be drafted this year, except for Fowler who will be a top 5 pick next season.

Prior to accepting the NTDP's invite, Lynch was drafted by the Plymouth Whalers of the OHL, and seriously considered signing, but instead opted to play for the NTDP and keep his college options open. He was courted by numerous top programs in the country, but chose to stay close to home by committing to the University of Michigan.

At the NTDP, Lynch established himself in a role as a reliable, defensive-minded center that can chip in some occasional offense. He'll continue his hockey career with the University of Michigan next season.

September 22, 2008: "Not the prettiest player to watch, but very effective. Can stickhandle around any defender one-on-one, though I'm not quite sure how. Draft Stock: Should stay about the same."

Lynch is a tough player to peg because his style is a bit unorthodox, but he does a lot of positive things on both ends of the ice that an NHL team would value. Plus, quite strangely, Lynch is like the only American player heading to a college that I've ever seen the Red Line Report be positive about.

Lynch will probably be selected some time in the later rounds, and it's unlikely he'll ever play on the top two lines of an NHL team, but the odds of him making a contribution to an NHL team aren't that bad considering how late he will be picked. Teams could always use defensively responsible centers, and Lynch may be able to provide that.