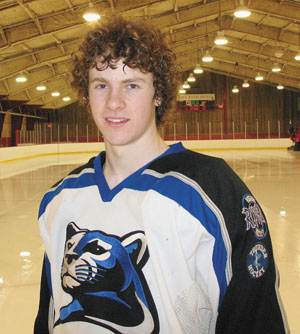 Nick Jensen first made a name for himself as a smooth-skating, puckhandling defenseman for Rogers High School in the far western suburbs of the Twin Cities area. Seeking a higher level of competition and more exposure, Jensen decided to spend his senior year of high school playing for the Green Bay Gamblers in the USHL. That decision paid off big time for Jensen, as he led the league in +/- rating, drew the attention of NHL scouts, and made a college commitment to play at St. Cloud State University. Jensen will also play next season in the USHL before joining the Huskies in 2010-2011.

Playing in the USHL helped Jensen learn to become a more responsible defenseman, as evidenced by his impressive +/- rating, but he also possesses the natural abilities to be an offensive force. As he matures and becomes better at balancing his offense and defense, he should develop into a reliable two-way defenseman.

Miscellaneous: Father Jeff Jensen was a 10th round draft pick of the Colorado Rockies in the 1978 NHL Amateur Draft

Huskies Recruit Has A Lot of Pluses April 2009

June 18, 2007: "
Another very talented player is Rogers defenseman Nick Jensen. Jensen is a '90 birthdate, and is a great skater. He's got decent size, and is still incredibly agile. I don't think he gets as much hype playing for Rogers, but he's definitely a high-end prospect."

Jensen started the season off the radar of a lot of NHL teams, but a great season in Green Bay, coupled with a long playoff run in the USHL playoffs gave scouts plenty of opportunities to see what he is capable of. Jensen is far from a surefire NHLer, which will probably push him into the lower rounds of the draft, but Jensen has shown tremendous talent, as well as the ability to raise his game to a higher level of competition in the USHL, making him worthy of a pick. Going back to Green Bay next year also means that whichever team drafts him will be able to allow him to develop for up to five years before having to sign him. In all, Jensen is probably worthy of being selected in the 4th or 5th round of the draft.