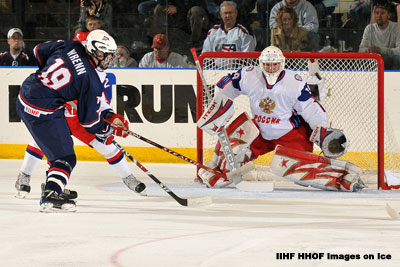 Perhaps no prospect in the NHL Draft exemplifies the changing geography of the hockey landscape than William Wrenn, who, in order to advance his hockey career, moved at the age of 14 from Achorage, Alaska to Los Angeles, California to play for the elite Los Angeles Selects AAA team. That move got the lanky, developing defenseman noticed by USA Hockey, and the following year, he agreed to join the US NTDP U17 team.

But it wasn't until the following year that Wrenn began to fill out and find his role as a tough, defensive defenseman. He also became more of a leader for the NTDP, and captained his team to a gold medal at the World U18 Championships.

He'll continue his hockey career at the University of Denver next season.

Needs to Improve: Being more of a playmaker

Wrenn Leading On and Off Ice- USA Hockey March 2009

September 22, 2008: "Not that noticeable, which is good for a defensive defenseman, though he wasn't exactly dominant from the blueline. Draft Stock: I probably had him a little high, and he should move down a little bit."

April 6, 2009: "Wrenn is just a quiet, steady performer. He won't blow you away with his skill, but plays a solid, very physical brand of defense."

Wrenn may have pitched in some offense at the World U18 Championships, but in the long run, that's not going to be his game moving forward. He'll may his career as a rugged, physical defender that takes care of his own end and stands up for teammates.

Wrenn is a player I could see slipping a bit on draft day, just because teams might have a tough time figuring out where he fits in. He's a physical player, but at just over six feet tall, and under 200 lbs., it's unlikely he'll be a huge physical presence in a league filled with much bigger players. He's got great leadership abilities and captain potential, but if he projects out to being one of the bottom three defensemen on his NHL club, it's unlikely he'd be elected captain anyway, though teams can never have enough quality personalities in a lockerroom.

That said, Wrenn has too much talent to pass up completely, and after a few years at Denver under George Gwozdecky, he should turn into a very well-rounded, responsible defenseman that can contribute at the NHL level. Wrenn will likely be selected as high as the third round, but likely somewhere around the fourth round.