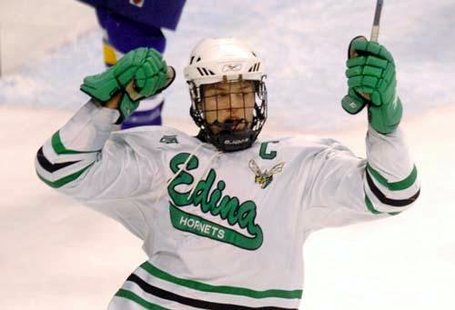 Zach Budish had been considered a near-lock to go in the first round of the draft until this fall, while playing football, when he tore his ACL, forcing him to miss the entire high school season and putting his draft status in doubt.

Growing up, Budish was the star of a talented group of five players that made their way up through the Edina hockey youth ranks, winning numerous titles along the way. As high school sophomores, they helped Edina earn a number one ranking in the state, and brought the Hornets to the state tournament. Meanwhile, Budish was also a star on the football field, playing linebacker for Edina, which also had one of the state's top football programs.

As a high school junior, Budish committed to play hockey for the University of Minnesota, where his father played football. He'll likely begin his college career with Minnesota next season.

Edina was projected to be the best team in the state of Minnesota last season, but Budish had to watch from the bench due to his knee injury, as his team made the state tournament, but was ultimately upset by Moorhead HS.

Budish has incredible size and strength that very few high schoolers could match up against. That strength makes him a threat to score from nearly anywhere in the offensive zone thanks to a very heavy snap shot. What seperates Budish from other power forwards is his great passing ability and unselfishness with the puck.

Needs to Improve: Skating, Toughness in front of the net

July 31, 2006: "One of his linemates was fellow Minnesotan Zach Budish. He helped set up some of Walters chances and looked good grinding along the boards."

Top forward at US Select 17 Festival-July 17, 2008: "Zach Budish(Minnesota recruit)- Physically dominated everyone at the camp."

The NHL Draft Combine doesn't always mean much in terms of where a player will go in the draft, but it was absolutely huge this year for Zach Budish, who got the opportunity to prove to every team that his knee was 100% healthy again and that it wouldn't have any long-term effect on his career. That combine performance likely moved him up from the second round, where he had fallen during the season, back into the mid-to-late first round. A huge influence in Minnesota's decision to bring Budish to campus next year rather than playing in the USHL for a year was that he would likely be a first round pick, and probably not play all four years for the Gophers. Given a few years to develop at Minnesota, Budish could turn into a dominating power forward that picks up assists as easily as he does goals.