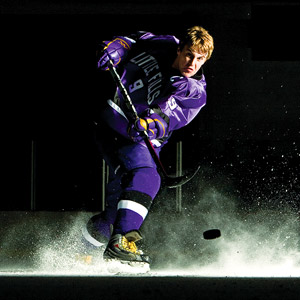 The first thing any fan will notice about Ben Hanowski are his amazing point totals; more than any other high school hockey player in history. An honor like that is sure to draw people's interest, but also draws a fair amount of skepticism. There's two things to know about Hanowski: 1. He didn't play very good competition at Little Falls HS 2. He's played in enough other events that have showcased his abilities as an elite player.

Hanowski has good size for a forward, but he plays much more of a skill game that relies on his great hands and scoring ability that using his size to score. Hanowski will continue his hockey career at St. Cloud State University in Minnesota next fall.

March 9, 2006: "The real star for Little Falls was Ben Hanowski. He scored two goals. One was a perfect shot topshelf, and the other was a nice breakaway. He's got very good hands for his size. He could be a little more physical with his size, but I think he'll definitely be a college player."

June 14, 2006: "My pick for a replacement [for A.J. Jenks on the NTDP team] would be Little Falls(MN) High School forward Ben Hanowski. Hanowski is almost as big as Jenks, and has incredible hands for someone his size. I think he'd be a more than suitable replacement.

March 9, 2007: "Ben Hanowski played a nice game for Little Falls. Since this is his third state tournament, and he's so skilled, it's easy to forget that he's only a 10th grader. His goal against Hermantown was a beautiful finish."

June 18, 2007: "He seemed to be skating harder than he did at last year's Model Camp. He's still exceptional along the boards, but it seemed like he never developed great chemistry with his linemates to generate a lot of offense. That tends to happen in these types of events."

July 16, 2007: USA Select 17 Festival: "I think he does better in a more structured setting, but he still finished the week with good offensive totals. He’s a very talented offensive player."

Hanowski is a real wildcard in this draft. Any time a player that relies almost solely on putting up big point numbers is set to take a big jump up in competition, there are going to be questions about whether he can make the adjustment and continue to put up those big numbers. Hanowski's skills are definitely legit, and he should be able to hone those skills in the wide open St. Cloud offense. The risk involved with Hanowski will probably push him down to the third round, but if he really develops, he could be a home-run type pick that turns into a big-time scorer 5 years down the line.