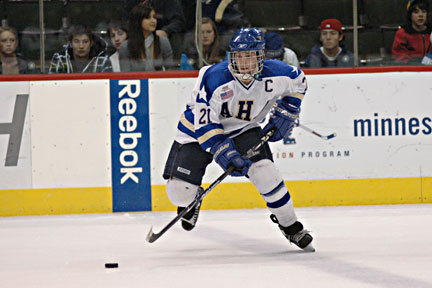 Danny Mattson first made a name for himself when he made the then number one ranked Academy of Holy Angels hockey team as a 9th grader. Throughout his high school career, the talent that surrounded Mattson graduated, and the quality of Holy Angels' team dipped a bit, but that never stopped Mattson from being one of the most talented players in the state of Minnesota.

Mattson isn't the biggest player, but makes up for his lack of size with good speed and an incredible offensive awareness and playmaking ability that makes other players around him better. During the 2007 USA Hockey National Select 17 Festival, Mattson was paired on a line with Calgary draft pick Mitch Wahl, and the two combined to dominate the camp. As a senior, Mattson was able to dole out assists at a rate of nearly two per game. This passing ability is the key to his success at the next level, as he likely won't be able to blow shots past goaltenders, but as long as he keeps making those around better players, he should be a valuable asset.

Mattson has committed to play hockey at the University of North Dakota, but it was recently announced that first, he will spend a year with the Omaha Lancers of the USHL to hone his craft and gain another year of maturity before heading the Grand Forks.

Mattson a Magician with the Puck NHL.com feature March 2009

June 19, 2006: "Danny Mattson, Holy Angels- He wasn't dominant, but he's also only a sophomore-to-be. In a couple years, he should be an excellent player."

July 16, 2007: "Danny Mattson: Tremendously talented and still really young. I was once again impressed with his speed, and he has good finishing ability. He’ll be one of the most highly-sought recruits for 2009."

September 9, 2007: "Team Southwest looks like they'll do very well because they've got a ton of talent on the blueline including Chris Student, Joe Gleason, Anthony Raiola, and Jake Gardiner. Danny Mattson looked like the best forward on the team. Zach Budish added a couple goals that weren't highlight reel material, but showcased his exceptional strength. His Edina linemate Connor Gaarder played better than I've ever seen him play."

November 10, 2008: "I had Danny Mattson rated a lot higher in the draft than most people do--though I also suspect I've seen him a little more than most people. I may have him a little too high just because he lacks ideal pro size, but his offensive instincts are certainly at that level."

Mattson's offensive abilities are good enough to make him a first round talent, if he were over six feet tall. Perceptions are changing in the NHL, and there are more spots than ever for skilled 5'10" players, but Mattson will still face an uphill battle in proving that he can play against bigger, stronger competition because of his size. In the draft, he could go as high as the late second round, but is more likely to end up in the third, or possibly even fourth round. Whichever team selects him will get the benefit of giving him as many as five years to develop and add on muscle before having to make a decision on him. If he is able to make the NHL, he'd likely end up as a second line center whose main focus is to feed the puck to snipers on his wings, and a player that can contribute on the powerplay.